Christopher Garetano, award winning film maker and the man behind the documentary  Montauk Chronicles, is seeking crowd sourced funds for another project, with will delve into the mystery of the creature known as Bigfoot.

The film, which went into production in October of 2015 and is reported to be at least twenty-five percent complete, will feature accounts of encounters with Bigfoot ranging from former United States President Teddy Roosevelt‘s account of a Bigfoot sighting from his 1893 book The Wilderness Hunter and the infamous ‘Patterson Film.’

END_OF_DOCUMENT_TOKEN_TO_BE_REPLACED

For millennium, people across the globe have been interacting with forces that can’t be explained.  Things science has yet to fully acknowledge. Creatures that are not just part of our present, but our past.  You will never read their tales in an academic history book. However, they have always been part of our cultures.

This is what I call Paranormal History.
You are walking through the forest, heading to your  favorite hunting spot when you start to get the uneasy feeling of being watched.  You think you are being paranoid so you try to  shake the feeling, but there is a movement from the brush. You grab a nearby rock and throw it in an attempt to flush the animal out.  Less than a second later an even bigger rock strikes the tree behind your head.

Full of terror, you take aim with you rifle, demanding for whatever it is to show itself. Suddenly, a blood curdling scream erupts from the brush, causing you to drop your rifle as you run for your life. This isn’t a scene from the newest SyFy original movie, this is what was recounted to me by a Kentucky resident in 2009.

END_OF_DOCUMENT_TOKEN_TO_BE_REPLACED

Beer has always gone hand in hand with some of our most beloved pastimes and indulgences, such as billiards and darts, baseball, a nice relaxing trip to the bar or pub after a busy day or pizza.

However, if the makers of Olympia Beer are correct, there maybe another thing that goes along perfectly with beer.

Or more precisely, catching Bigfoot and walking off with a cool one million dollar prize…

END_OF_DOCUMENT_TOKEN_TO_BE_REPLACED 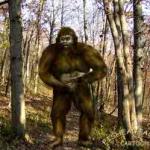 END_OF_DOCUMENT_TOKEN_TO_BE_REPLACED

Here at News From the Spirit World we encourage people to seek out the truth about strange events and interesting places, but we also encourage you not to try to make any money from it.

At least not without a permit.

This helpful hint seemed to escape Matt Pruitt, who went with around thirty or so people in tow to the Buffalo National River in Arkansas to hunt for Bigfoot. Some of the people on this expedition say they paid payed between $300 to $500 dollars to be part of a three day hunt for the legendary Sasquatch.

However, since Pruitt did not have any legal permission to charge people for such tours, he was slapped with a violation from Forest Rangers Billy Bell and Ben Henthorne after a  concessionaire in the Steel Creek Campground area had met a couple of park goers who told him about the Bigfoot expedition.

Pruitt is reported to have connections to The Bigfoot Field Researcher’s Organization.