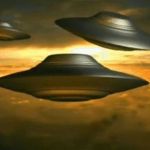 A fragment of a dome like object was discovered in a forest near Siberia.

Residents from that area were told to move the 440 pound object to the village to wait for it to be collected by the government.

The object, which has been deemed NOT to be radioactive and made at least partially of Titanium, is now under armed police guard.

“The object found is not related to space technology. A final conclusion can be made after a detailed study of the object by experts,”

“You can see inside it, all is open, it’s empty, no danger here. We were asked to take and store it. We brought it here. And now we are going to wait until they come to take it if they need it,”

The legend of Amelia Earhart and her disappearance in her Lockheed Electra while trying to fly around the world in 1937 has become infamous to generations of people. Every theory from mechanical failure to UFO’s has been thrown out there and yet no one has conclusively closed the case.

But US Secretary of State Hilary Clinton knows which theory she is backing.

END_OF_DOCUMENT_TOKEN_TO_BE_REPLACED

It has sat in the earth for 120 million years and when it was alive it had a wing span of 13 to 16 feet and is a part of the ancient Pterosaurs family of reptiles.

This creature is the Guidraco venator, which when translated from Chinese means “ghost dragon hunter” and it is one of the most amazing fossil finds in recent times.