Could there have been vampires in Iron age Yorkshire?

It is certainly the case that Eastern Europeans would use sharp objects to pierce the bodies if suspected vampires or revenants. The piercing allowing gases to escape, making the bloated corpse deflate and look more ‘dead’. Which, obviously, led to the ideas in Vampire stories about a stake through the heart. The story here seems to suggest something similar in the UK during the Iron Age.

The Eastern European belief is that plagues and bad luck in an area were linked to the restless dead feeding. So, to end the bad luck they would dig up the last person buried (as the most likely candidate) and perform various rituals to lay them to rest – including using iron nails and even fence posts to impale them. Most of the time they would find a corpse that looked like it had gained weight and was showing signs of hair and nail growth*, which added to the evidence that they were still alive and feeding on the blood of the living. Piercing of any form would release the gases and the corpse would look more like you would expect it to. If the bad luck didn’t go away, they would go back and do more rituals that went up to cremating the body.

Is this case an example of the same thing? This is certainly a bizarre burial. The corpse was found pierced with 9 spears – some bone, others iron. There are theories. One being that it was because he did not die in battle – the postmortem injuries inflicted as a way to ensure a warrior’s death. Though this does not explain the head injury described in the article. Another theory is that it was a ritual killing similar to the bog burials, where the victim is knocked unconscious or killed with a blow to the head before being ritually murdered.   However, the theory that is catching the imagination of most people is the vampire one – that there was some reason they feared his return as a revenant. Or even went back to perform the stabbing ritual after he was buried due to some bad luck or plague, the same as the Eastern European folklore. This, along with the sacrifice option, may explain why the spears were left in place – to ensure he did not get up.

We may never know the real reason why this bizarre ritual was performed but it does highlight some interesting parallels in folklore. Similar ideas appear in different cultures. Obviously, the conspiracy theory answer to this is ‘Vampires are real and many cultures encountered them’ but more likely this was because there was actually more travel and communication between cultures than used to be considered possible. Briton at this point may have been primitive but Rome (due to invade in another 250 years or so) was already a Republic and starting to form an Empire. Burial could in theory spread over Europe. It is, however, very likely too much of a stretch to link this practice with that of Eastern Europeans in the 1800s.

Instead, let us consider the coincidence of an iron age vampire being found in the same county as Whitby – the place where Bram Stoker had Dracula’s ship land on his journey from Transylvania.

*Due, as we now know, to the skin shrinking back from the hair follicles and nail bed rather than any actual growth. 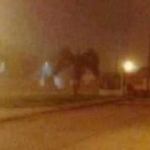 Browsing social media I could not help to notice that reports of clowns had died down and in its place for the newly minted year were demons.

Rather one particular demon (or angel if you think that is what this image is), which has been making the rounds across social media and tons of news outlets since it was posted on Facebook on Sunday.

So what the hell is it?

Well, one thing is for sure it is one odd image but there are other possibilities…

END_OF_DOCUMENT_TOKEN_TO_BE_REPLACED

The pop/disco group the Bee Gees were among the most popular music groups in recent musical history.

Formed in 1958 by Manchester natives Barry, Maurice and Robin Gibb, the group would not only eventually be inducted into the Rock N’ Roll Hall of Fame in 1997 but also are one of the best-selling groups in history, surpassed only by such superstars as Michael Jackson, Elvis Presley, Paul McCartney and McCartney’s former band, The Beatles.

Along the way, they endured not only huge successes but also drama and tragedy as well, with many line-up changes, substance issues and eventually, illnesses that would lead to the deaths of both Maurice and Robin Gibb, leaving Barry the last remaining Bee Gee alive today.

END_OF_DOCUMENT_TOKEN_TO_BE_REPLACED

Kingsley Agbaire of Warri, Delta State in Nigeria murdered his friend and business associate, Lawrence Okoh, on August 4th of this year after a botched sale of auto parts that turned into murder.

Suspicions were raised by Okoh’s wife after he did not return to his home in Port Harcourt, Rivers State.

Friends and family tried to reach Okoh after he stated that some of the parts he brought out to Agbaire were now missing and Agbaire was nowhere to be found.

Okoh was warned to leave Warri after this incident but Agbaire convinced Okoh to stay in the area, which has a dangerous reputation.

On the evening on August 4th, Okoh’s wife tried to reach him by cell phone but the person who answered told Okoh’s wife that she had reached the wrong number.

A police investigation revealed that Okoh had been murdered.

END_OF_DOCUMENT_TOKEN_TO_BE_REPLACED

The house at 108 Ocean Ave in Amityville, New York has become an infamous icon in both fictional horror circles and with those with an interest in true-life stories of paranormal phenomena.

Over the years it has also become an unofficial tourist attraction as well, with people stopping to gape at the house and pose for photographs with the house as a backdrop.

Many times it has even been suggested that the dutch colonial home should be converted into a tourist attraction such as a bed and breakfast style lodging accommodation or a paranormal museum.

Add those ideas to others including the intense desire by paranormal investigation teams to have access to the house and conduct the first known investigation of the property since the Warrens in 1976 and you have a lot of people who would like to see such a plan come to fruition.

One individual took this idea and ran with it straight to the crowdfunding website ‘Go Fund Me‘ in June of this year.

Although the idea of being able to actually walk into the Amityville Horror House and see the locations where not only a brutal multiple murder occurred but also the site of one of the most famous haunting cases in recorded history seems like a dream come true, don’t pack your bags just yet.

There are many factors that scream ‘get out’ at any potential investor in such a scheme.

END_OF_DOCUMENT_TOKEN_TO_BE_REPLACED

It’s (Not) Official: Yoga is Satanic

Yoga, Harry Potter, and Twilight are the causes of an upsurge in demonic possession, according to Father Cesare Truqui, successor of Father Gabriele Amorth, the Vatican’s chief exorcist for some 25 years.

Twilight I can believe – but yoga?

Okay, so it’s not solely Twilight he calls “Satanic”; it’s anything that portrays vampires or demons as something desirable or in any way sexy. Let’s hope he’s never read Vampirella! END_OF_DOCUMENT_TOKEN_TO_BE_REPLACED

Colorado Rockies starting pitcher Jon Gray is only in his second year pitching for a Major League Baseball club, but at twenty-four years old already shows promise to be a major contributor to his team.

While surely Jon Gray will still be throwing sliders and acquiring strike outs for years to come, he also has an interest in paranormal investigation, which he does in his spare time away from baseball.

Gray formed his interest from his own encounter with the paranormal, which happened when he was just ten years old.

END_OF_DOCUMENT_TOKEN_TO_BE_REPLACED

Peckish? You might be eyeing up a piece of candy found behind the sofa, wondering what its “best before” date is, whether you could still eat it without catching the lurgy.

Alternatively, if you head to the National Museum of Ireland, you could get a lick of a 2,000-year-old block of bog butter which some experts think could still be edible.

Now that is a way to make any meal more interesting and if your having a bruch or dinner party it makes for a great conversation piece.

END_OF_DOCUMENT_TOKEN_TO_BE_REPLACED

Jessica Chastain Runs Into Ghost While Filming The Huntsman

Actress Jessica Chastain, whose credits include films such as The Help and Zero Dark Thirty, encountered a ghost while filming her most recently released work: The Huntsman: Winter’s War.

While staying in a house near where the film was being made in London, Chastain believes she made contact with a ghost, one that seems to like to play with electricity and has a tendency to keep the living residents of the house awake at night.

Chastain spoke about her paranormal experience while a guest on The Late Late Show With James Corden:

END_OF_DOCUMENT_TOKEN_TO_BE_REPLACED

A school in Kelantan, Malaysia was shut down last week after students and staff reported the presence of a ‘Djinn’ or ghost.

SKM Pengkalan Chepa 2 school has now reopened after a few exorcisms by holy men and a witch doctor.

The ghost was  caught on a camera phone by a student at SKM Pengkalan and was posted to Twitter under the screen name @PhilipGolingai.

The reason for the haunting has been lain at the feet of an interesting party…the children who attend the school.

END_OF_DOCUMENT_TOKEN_TO_BE_REPLACED

Last Light On A Winter’s Night